In and Out Goes the Needle 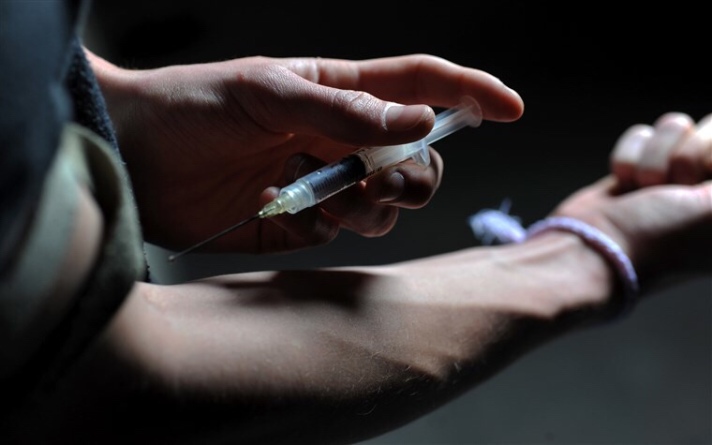 An hour ago I watched as a needle went into my vein, sliding in effortlessly, a slight sting when it broke the skin. It went nearly unnoticed. During many years of medical treatment I have had hundred of blood draws but also injections, shots. I am unsure if Americans use the word injection and that shot is colloquialism that has become so prevalent that everyone uses it. Is there a “real” word for a shot here? This is irrelavent however. The shots I have had have tended to be in the arm, the butt, or the stomach. How does it feel to inject something into your body through your arm? Heroin? Does it feel different than the withdrawal of the needle? Is there pain, tingling, numbing, heat, coolness as the fluid enters your body?

I have never wondered about any of this before. Before September of last year when I starting making friends with addicts. It sounds so serious, so dangerous, edgy, cool. Well it’s not. I was in a hospital (not a medical one) for detox and psychiatric patients. We were all together on the same floor. About twenty of them, and six of us. Six psych patients. It was an eye-opening experience for this poor little rich white girl from the Northside. I am White. I am from the North (NW) side. I am fucking broke. You get the point though. Addiction is not a disease of poor brown people. I was asleep for the first two days because they decided I needed to be taken off benzodiazepenes. Instead of weaning me off, they knocked me out with phenobarbitol (yes – some fucked up places still use it). When I woke up a couple of days later I went to my first group meeting. My roommate was amazing. She was chatty (mania) but I am naturally that way anyway. We got on great and hung out for the whole week. Back to the first meeting. The room was full of mostly men and about 5 or 6 women. We went around the room saying how long it had been since they had used and what their drug of choice was, or why we were here. As people spoke I heard “coke,” “crack,” “heroin,” “meth,” and alcohol. I also learned that African-Americans from the poorer parts of the city call heroin heron. Everything is an education. Of course I thought cocaine was fine because I had done it many times. I’d done crack once, so still not too scary. “Normal” people used them. Herion and meth? What the fuck? I remembered being in second year in school (tenth grade) and a heroin addict came in to religion class to tell us his story and battle against heroin. He had been clean for four years. He spoke about injecting into his feet and testicles when all the veins in his arms collapsed. He spoke about how addiction had seized him. I knew I would never try heroin in my life. That was the truth then, and that is the truth now. How about when I was in my deepest despair? Would I have picked it up? I cannot say no for sure. If I was drinking and cutting and looking for any escape, might I have taken that one? I cannot say. I think I probably would have, ignoring everything I had felt and learned. Rationalizing that I deserved that high. I wouldn’t become addicted like everyone else. Is meth such a big jump from their. Maybe, maybe not. How do I know I wouldn’t let my rigid rules against using it to fall by the wayside.

I have seen addicts of almost every substance imaginable. Some substances more dangerous than others. Some more addictive. When you are in the grips of addiction, it doesn’t matter. All addicts have a kinship. You’re in or you’re out. Part of the club. You know what it’s like. They don’t. Those outside. It is a blessing and a curse. It is wonderful to surround yourself with people who understand how you feel. Who feel your pain. Who know how tough the struggle is. Who you can talk to about everything and anything. The downside is that once one person falls it can cause a domino effect. It can on the other hand prop the relapsed up. The hope is that people are secure enough in their own sobriety that others will be unable to influence them negatively. If the worst happens and several fall, what then? Do they descend further and further into the abyss? Do they help each other climb out. I’m sure it happens both ways, but is too dangerous to risk. Any time I’ve relapsed, sober friends (addicts not ‘normies’) have been there for me to a point. Once it gets to the point where their sobriety is in danger I’m out. And that’s the way it should be.

So where do I go from here? Where do we – a population unto itself – addicts – go? We are often feared by normies. Feared by our own families. Feared by ourselves. We are an unknown variable. When we are new to sobriety our mood and therefore behavior are often erratic. No one trusts us. We have likely hurt them numerous times before. There but for the grace of God go I, they think. Or more likely we are looked down upon. It is our fault. We put ourselves in this position. We only have ourselves to blame. We just need to quit. Many times they don’t try to understand the process we are going through. They just want us to dump our substance of abuse. Then everyone can move on and pretend like the messy past never happened. Once you’re an addict you will always be one. Whether you are in active addiction (currently using) or in recovering (not currently using). This is not something we will ever be cured of. Things will continue to improve for us should we stay in recovery. Addictive addiction is only one hit, pill, shot, drink away. Although we and our addiction has hurt you many times, now is not the time to pull away support. On the other side, we need to understand that you have suffered greatly because of us. We cannot expect your unwavering loyalty, but would appreciate it. One of my loved ones got to the point that he had given what he felt he could give. He had to start thinking of his own sanity. I completely understood this. How many times can someone give chances while it is killing them inside.

So as I watched the needle exiting my vein, I realized I had all these thoughts within seconds. It’s funny how quickly our minds speed through our thoughts while this typing feels like is taking me infinitely longer. A funny thought pops in my head. Whenever I tell people I am an alcoholic and am Irish, they laugh. They think I am joking, or that all Irish people are “alcoholics” in a jovial manner. What’s so fucking funny about alcholism? Sláinte – the Irish for “To Your Health” and “Cheers”. Two vastly diverging idea. Only the Irish would have an alcohol related phrase tied to a health phrase. Bottoms up. Water or wine. No. Dump the wine.