“The Divided States of Embarrassment” – White America by Eminem 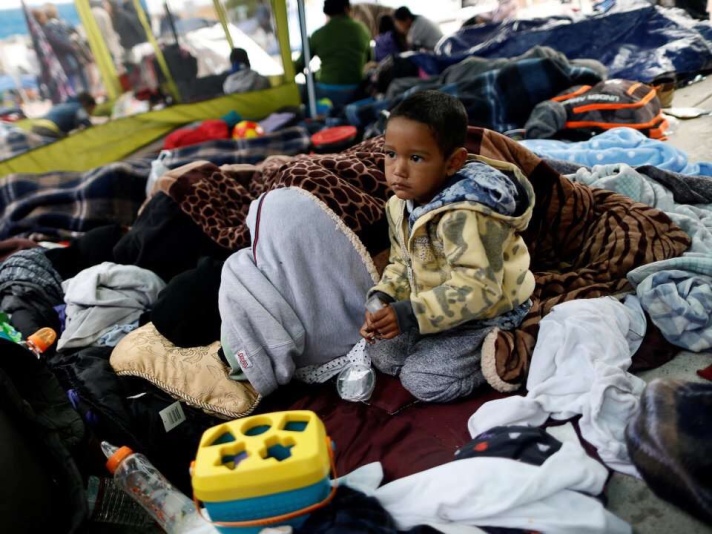 There seems to be some debate as to what is happening at the southern border of the country I call home, The United States of America. I’m pretty sure the ‘debate’ is being spun by the right wing group or groups who want to whitewash the truth. Who do not want to be seen for what they are: evil, racist, fear mongering, Hitleresque bastards. I am crying. I am literally shedding tears from my eyes. Whether their parents decided to take the risk to bring them across the border or not, surely does not matter one bit to these incarcerated children. If several children were in a hostage situation with their parent(s), and the police resolved it by killing all inside, I think most of us would be disgusted. It is an exaggerated example of course, but I am trying to equate it to an example where American children might be involved.

I am not sure of the exact details of Trump’s new rules, and those of the people in his government. Is there a minimum age limit? Are infants that are being breastfed being taken from their mothers? Are infants under one allowed stay with their legal guardians? Two, three, four? The majority of these children are Spanish speakers, assuming they are old enough to talk. I presume and hope their caregivers, the government employees, are fluent in Spanish. Is that assuming and hoping for too much? Are there caregivers at all? Are people interacting with them regularly? Do they have school? Toys? Play time? Laughing time? Are they in those cages all day? What about children of other nationalities? Obviously there are Brazilians who speak Portuguese, but many Asian immigrants come across to South and Central America to come into The U.S. across our Southern border. Are those children being spoken to in their native tongues? Once again there will be the naysayers who blame the parents. Yes great. It is the parents’ fault. Now does that mean a five year old should be locked up unable to talk to anyone for God knows how long?

Do you know why people still emigrate to the U.S? I’m not talking about people like me from Ireland or other Western countries. I’m talking about people who feel compelled to attempt the dangerous, sometimes fatal illegal crossing from Mexico? They do so out of desperation. They don’t think “Gee. Wouldn’t it be fun to live in America? We should try that. I hear it’s great.” Their country does not offer anything near the opportunity of ours. They most likely couldn’t get jobs that paid enough to support their families, or broke their backs working. You most likely are a white privileged person who never had to work anywhere near as hard as them, or had money in your family. Or… hold on… no need to jump down my throat… Or were white at the very least. White and therefor had more doors open to you. One of those whites that truly, incorrectly believes that people of color have the same opportunities as us. You do not seem to realize racism is still alive and well in this country. That black children are far less likely to succeed than white ones. It has nothing to do with intelligence or a lack of initiative. It has to do with years and years of slavery, segregation, lack of civil rights, then racism (still existing), then the expectancy placed an entire race to magically be able to educate themselves in one or two generations. The point I’m circling back to is that these people that you resent, that are coming into ‘your’ country are more than willing to work their behinds off. All they want is to do that. To provide for their families. To send their kids to school. To love their families. Hopefully similarly to what you want.

America is already a melting pot. That is never going to change. It is never going to be all-white. Never. So you can fight and fight. Or you can try to see the similarities between you and everyone else. You can smile at the little girl on the train who’s speaking in a foreign tongue you don’t recognize. It doesn’t matter that you don’t speak her language, because when she says something similar to ‘baba’, ‘papa’, ‘dada’, she’s probably saying ‘daddy’ just like you’re little girl did to you twenty years ago. Remember how that melted your heart. Could she melt your heart? Her skin is brown, her hair is jet-black, her eyes appear slanted to you, but she’s gorgeous and she’s just like your daughter. She’s giggling and her father is laughing. Could they take your mind back twenty years to how you felt then, or will you did yourself in, and allow yourself to harden your heart against a little five year old girl, on the train with her family. A beautiful family, enjoying a weekend out together, doing what every other family wants to do – just be together. Which way will you choose to go. Could she melt your heart? Maybe? Just maybe? Please try to see your family in hers….

George Takei spoke out today against the latest policy. For those who don’t know, he is an actor, famous originally for his role in Star Trek. He frequently vocalizes his opinions about divisive political issues. He was held in an internment camp during World War II with his parents, due to their Japanese heritage. Today he shared his opinion that today’s border policy was worse than what happened to him. I will share a large chunk of his quote because he puts so well what so many of us are thinking, and having gone through internment I feel his position carries a certain weight many others’ doesn’t.

“At least during the internment, we remained a family, and I credit that alone for keeping the scars of our unjust imprisonment from deepening on my soul,” he continued. “I cannot for a moment imagine what my childhood would have been like had I been thrown into a camp without my parents. That this is happening today fills me with both rage and grief: rage toward a failed political leadership who appear to have lost even their most basic humanity, and a profound grief for the families affected.”

I feel helpless. So many of us do. What can we do. It is not enough for us to be kind to our neighbor. Not be racism. Give to charities that help new immigrants and on and on. How can we actively help these families? Can we help them? Can we lobby our politicians to do something about this mess? Will it make a difference? Has America as a nation become hateful towards infants? Is this the country I live in? I really don’t think it can be, but what do I know? I’m from Chicago. We’re officially ‘nice’. I have no idea what the world outside here is like. Chicago is mostly Hilary country. Democratic land. We speak openly and freely about hating Trump here. Whether that’s a good thing or a bad thing could be up for debate, or maybe it shouldn’t. I am exhausting by people trying to tell me why we have to respect the office of the President. I did that on George W. Bush. I did not like him or his politics, but I spoke ’til I was blue in the face about respecting him as the President. There are limits to every rule people. Presidents who are amoral do not get the privilege of my respect. No Mr. Trump. I will not stand if I meet you. I will not address you as Mr. President. You have not earned that from everyone. You are a danger to me, my children, and every seven billion people on this planet. Most pressingly you are an evil man, in your careless attitudes to families. I doubt you will ever understand what you are doing, or certainly care, but somehow, whether it’s by impeachment or somehow the house or the senate being able to block or overturn your laws, I hope this ends soon. These children need their parents. You are doing irreparable damage that might be seen for years to come.