It’s seems like this trip has been coming forever. I suppose it has been really. I’ve stressing about it God knows. Worried that I wouldn’t make it, worried that I couldn’t handle that pressure, and wouldn’t that I couldn’t handle eleven days with extended family, and indeed my own family. We were running around like crazy the night before, trying to get most of the packing done. They say bring half the clothes you want to bring, and double the money. Well we managed well on one front: we packed frugally. We did our last bits and pieces of packing in the morning in a somewhat panicked manner. We had planned to leave around noon. At 12:30 we finally book a Lyft with 6 seats headed to O’Hare. When it arrived it was pretty obvious the bags and people would not fit in without some creative thinking. The driver suggested putting me and my three children in the middle row without seat belts on – on the expressway. I say no fucking way. Eventually we moved things around, and got going, but why the heck would you accept a fare when someone asked for a 6-seater when they say they are going to O’Hare. It’s pretty likely that they’re going to have a lot of luggage! He also decided to text half the time we were in the car.

Security was fine. They didn’t seem bothered that I had about twenty prescription bottles in my carry-on and injectibles too. I’d been stressing about it for days. We went straight for the gate and hung out. My stress levels rose as we waited. I was dreading the trip and the flight. I’m a nervous flyer anyway. There was a small airplane – maybe a 737 – at our gate, and I wondered what on earth it was doing thinking it would be flying for 9.5 hours across the Atlantic. Turns out it was just hanging out for a while. It left and out larger 767 plane soon took it’s place. I saw our pilot at the helm, and to my somewhat surprise, and also delight, I saw she was a she. Holly Fibbs was her name. 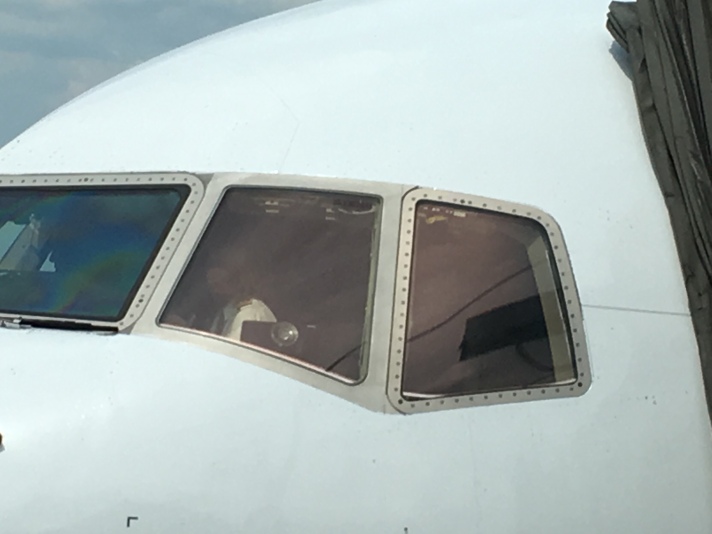 Once I was on the plane I was no worse. My youngest, #3, who’s nearly six, started to be a little nervous. Her last flight was four years earlier, which she obviously didn’t remember. She held my hand and her daddy’s hand. She was impressed with take off I have to say. I had messaged my psych the day before to ask him if I could take my sleeping pill at 16:00 Chicago, right when the plane took off. He didn’t get back to me. I took that as a yes – sure he’d say no. I usually take 200mg of Seroquel half an hour before sleep and get real mellow and pass out. I took 300 mg for good measure and got nothing. Nada. Zip. For the whole flight! Boo to that. #3 on the other hand got a ton. While she was at it I got a ton of kicks in all sorts of places. 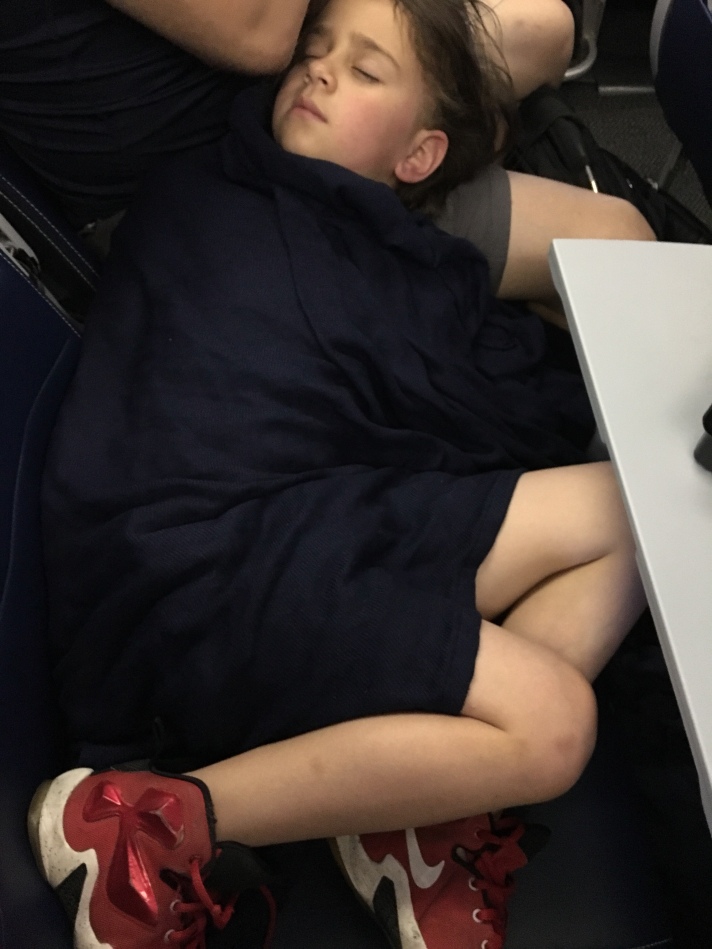 I ordered the pasta for dinner and it came with faro and spinach. The pasta also had spinach. My blood is already too thick, so spinach is a no-no. After I took off all my spinach and ate my dinner – yum – airplane food. The Faro was actually okay. The non-spinach spinach pasta was pretty crap. I tried to sleep, and basically stared at the blank TV screen in the seat back in front of me. I haven’t been able to watch much in the way of TV or movies in a couple of years. Nothing appealed to me. My iPod died half way across the Atlantic. I had to give myself one shot of a blood thinning medication, because my regular blood thinner wasn’t doing it’s job quite well enough. That caused a big palaver. I got the airstewardesses involved, and they got a sharps kit and told me not to do anything until they got the kit. Anyway, eventually I got my medication injected, and disposed of as they wished. All was well, and we were only a couple of hours from, thirty minutes short of midnight, Chicago time.