I’m going to try this again. Last week I attempted to write a positive post. Almost all my posts, maybe 95% or more, are negative. It’s mostly because I am severely clinically depressed. Even when I’m not depressed, I tend to have a dark sense of humor, and a dark outlook on things, even when I’m happy. So let’s forget that, and try to get back to this post that erased itself. Maybe it’s a sign that I’m not supposed to write happy shit. Ingrid…. STOP…. The point of this post, is to remind myself of a few things that I enjoy, or have enjoyed over the last while. To remember that despite my depression, I can still find happiness in small things, and some larger things. With the hope that these things can get me through, until I am strong enough, to get myself through by being happy enough on a day to day basis. I am not naive enough to expect rainbows and unicorns daily, but I need my baseline to be much higher to survive with any kind of satisfying life. Until then… There’s this post!

I usually take The Kennedy downtown. I live right beside it so it makes sense. Driving all the way to the Lake to take LSD down does not. Get your minds out of the gutter. LSD is Lakeshore Drive. One morning last week I decided I had plenty of time so why not take LSD down instead of The Kennedy. LSD coming into the city has my favorite view by far. All views coming into downtown are pretty spectacular, but it wins out. Chicago has a beautiful skyline, and it’s nice to be reminded of that now and again. It can perk up a shitty morning a little.

We’ve lived in our house for seven years, since April 2011. We first saw our house in September 2010. It was a gorgeous sunny afternoon, and all the trees were still in bloom. The street looked amazing. Over time I got used to it, and forget to enjoy it most of the time. When I do remember it I’m blown away all over again. This week, with it being the start of the summer again, it was time for me to appreciate it once more. I really love our street.

I was running around bringing kids here and there, picking up groceries, and doing all those fun kind of mom things. As much as we love our kids, they often are a lot of work, and feel like a huge drain of energy. Like everyone else, I am exhausted at the end of the day. I often realize that I have forgotten to appreciate the many fun, amazing, cool things they might have done that day. Last week in Target, #3, aged 5, asked me to take a picture of her by the car. I was harried and said yes, but let’s make it quick. It wasn’t until I took it that I realized how cool she’d dressed herself, donning her dad’s hat and all. She’s a riot, and I’m often too rushed to love that about her. These little moments are good reminders to stop and slow down. 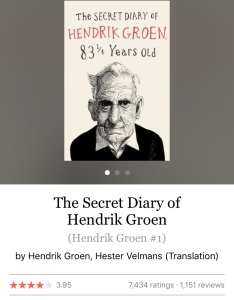 I used to read a lot. Like a lot. I read about a book a week in 2016. I read on the train, the
bus, before bed, anytime I had the chance. Then depression fucked everything up – blah blah blah. It is mid May and I have read two books so far this year. The current book I am on (only thirty pages in) is hilarious. Even though I rarely read, I am enjoying this when I do read it. A good book really is a joy. It seems like such a simple pleasure. Last year, in my darkest time, I was reading very dark books. I’m finding reading this funny book to be a little bit helpful. We’ll see if it acts as a tonic or not, but for now, it’s a good read at least. I highly recommend it!

One of the reasons we bought our place was the large back yard. Chicago lots are a specific size. Our house backs onto Metra tracks (railroad) and they own the land at the back of our property. Some of their land is within the border of our wall. For all intents and purposes it might as well be our land. Anyway. With our big yard, my husband decided from day one, we should have a fire pit. He designed it and built it from scratch. I have to say I underestimated his skill. We don’t use it very often, but it is wonderful when we do. The kids love making s’mores on a real fire. It’s great on those slightly cool spring and fall evenings to heat the night just a little. One of those little extra things that I love about our house.

out more, heading to the parks, and yes, getting ice-cream more. Usually I don’t bother partaking when the kids get ice-cream, but this year for some reason I’ve been joining in. It brings back fond memories of childhood, diving into ice-cream, sitting on park benches. Now however, after finishing I merely watch the kids play, instead of run and join them on the equipment. It’s so relaxing to see them. Something I used not enjoy when they were younger, I enjoy so much now. They interact so well together now. Much fewer fights than at home.

My husband and I went through phases of bringing our older two out for meals a few years ago. We wanted to show them how to properly act when out for dinner. How to enjoy a good meal, and so on. The youngest, was at an age, where she was still too young to be involved. I don’t know why we stopped doing this, but now that I’ve noticed, we must start again. I think we did it every month, alternating child, rather than parent, so parent usually got two months in a row. #3 is old enough to be involved now. Definitely another enjoyable activity to revive.

Finally, traveling with kids can be extremely stressful, the younger, the more so. I had

the pleasure however, of traveling with my older two on their own, in April and September to Ireland in 2016. They were nearly 10 and 8 years old. They were very easy to entertain, manage. The ate whatever was served. They were no problem in terms of boredom. The 10 year old did complain and kind of tantrum when our outbound flight return to O’Hare when the landing gear would not retract, and we all were sent home. She wasn’t the only one. I managed to convince her it was a good thing, because we got to go through another country, England, yay, the next day. So exciting to fly though Manchester. Woopy Doo. Anyway. Traveling with older kids one-on-one really is great!

I intend to try to keep these and other positive things in mind while negative me strives to pull me in the other direction. We all know it does it’s best to do that. I could do with reading this now and then. So here’s to me being most positive, and maybe having a few more positive things to write about soon!

One thought on “I’m totally positivo!”