I broke my wrist on June 29, 2017. I was walking with my the husband from our children’s therapist to the Blue Line. I had a terrible winter and spring with my Mental Health. We had received somewhat bad news form the therapist. We were heading underground to the platform at the Washington stop. On our way to the ‘El’, we joked that it couldn’t get worse. Things had been so rough, and disheartening for so long. It had been raining earlier in the day, so the soles of my gym shoes were wet. We had already gone down into the station, and were about to head down to the platform. On the second step, my feet went out from under me. 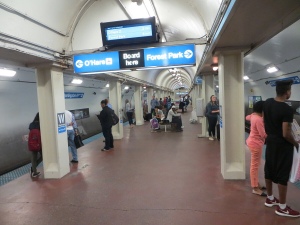 I immediately knew my wrist was broken. I didn’t look at it starlight away, because I was cradling it in my arm, saying “Fuck, fuck, fuck, fuck. It’s broken. I know it’s broken. Fuck.” It felt weird. Not exactly painful, more all the nerves firing at once. I did not cry, although I would not have been ashamed if I did. We were about 12 feet form the CTA workers kiosk. He did not come out to see if anything was wrong. The hubby went to him, and said his wife’s wrist was broken. He then came out. The first words from his mouth were, “It’s not our fault. The stairs are dry.” Not – “Does she need an ambulance? A cab?” Just – hey it’s not our fault.. I should have sued anyway, just to get even. I probably would have won, if I got a decent lawyer. However, I would be screwing over the City of Chicago, which is already broke. Mean CTA man would not give a shit. The people of Chicago would be further in the red.

We got a cab to Northwestern, my favorite hospital. It was really quiet in the Emergency Department, so we were brought back right away. The hubby went home to be with the kids, and I stayed to face the music. I kept saying to the nurse that maybe it wasn’t broken after all. She laughed at me, in a goodnatured manner. “Eh, honey. Look at your wrist.” Yeah. I was full of crap. That wrist was like a dog’s leg.

I had x-rays, which we read quickly, and the doctor came by to show me the break. The radius and ulna were both broken, and the bottom part of both bones, had moved forward and to the left. Yippee! He had to perform a reduction on the wrist. For this, he injected a numbing medication right into the wrist. Holy shit! That was the most painful thing of the ordeal. Reducing was painful too. I had been warned that the numbing meds were far from perfect. It was not as bad as I thought. I bit down on the blanket and the doctor pulled the crap of my arm. I whimpered a little, and apologized. He laughed and said he seen grown men bawl during a reduction. I’m not brave however, it just didn’t hurt terribly. I am in fact, a pain wuss.

I was told to make an appointment with an orthopedic surgeon for a couple of days time. I was given a temporary splint instead of a cast. I saw the surgeon a couple of days later. More x-rays were taken, and he said I might need surgery, but we’d see next week. I got a lovely pink cast.

Week by week, I came back to see the surgeon. Each week he said maybe we’d plan surgery the week after. Each week the measurement of the angle increased a bit indicating surgery. In the end, the angle was way past where it should be. Dr. K decided against surgery, however, because of my heart disease and blood thinners. I did physical therapy for about three months after the cast came off. I am nine and a half months out. My range of motion improved considerably, bit I still have a considerably limited range. I cannot get my right hand at better than a 45° angle. I also cannot wipe my arse with that hand. I am petrified that I will break my other hand, and be screwed. Seriously – what the heck would I do? I fell in hospital a few weeks ago, and my first thought was please break the right, not the left! Thankfully I broke neither.

I have noticed the pain increasing over the last several weeks. I think it may be in part due to all the writing I am doing. I am not willing to give that up. I was doing okay lifting things, but now it causes significant pain. Writing. Simple tasks like eating with a fork or spoon. It is ligament pain, which is also mostly to blame for the crappy range of motion. It is unlikely that my range of motion will improve significantly at this point, or at all. I have an arm that looks like it was broken, not that I give a shit. It has a big lump where it broke.