D’ya remember when Father Ted first came on the tele. It was on Channel 4, which annoyed me simply because I was very protective of Ireland, over Britain. Why did they have to air “our show?” I was a teenager, and that’s my excuse, and I’m sticking to it. Well the show took Ireland, and somewhat Britain, by storm. It was bleedin’ deadly from day one.

I was browsing on Amazon Prime Video the other day, and bejaysus guess what I found? All three seasons of Father Ted, included with my subscription. Jackpot! For those who have never watched Father Ted: (1) What the fuck??? (2) Do it. It is absolutely hilarious. Or at least appeals to the Irish sense of humor. Maybe it doesn’t travel well. In that case, sorry I wasted your time. Sorry. Not Sorry.

I thought I might find it a bit dated. I thought I might have matured, and so find it less amusing. I was twenty when I had last watched it. Also I am about the most immature forty year old alive. I threw on Episode 1. My husband was watching with me. The Mexican and Irish senses of humor are very different indeed. Also some of the jokes might fly over the heads of non-Irish people. Right enough, he fell asleep. Mind you he does that a lot. After a few minutes I was giggling away, and shortly after that roaring laughing, so much so that I woke my husband, who told me to keep it down so I didn’t wake the kids.

It was my favorite show of its day, and half the nation was glued to it. Everyone knew that Mrs. Doyle, the housekeeper, would shove a cup of tea down your throat if you went within a mile cof her. Fr. Dougle McGuire was as thick as Christmas. Fr. Jack Hackett was likely to be drunk on Jameson (or toilet cleaner), curse, and throw things at the tele smashing it. Fr. Ted himself glued it all together, getting into unlikely tricky situations.

The cast was great. Fr. Ted was played by Dermot Morgan. Fr. McGuire, by Ardal O’Hanlon, who is from my alma mater, Dublin City University, Fr. Hackett by Frank Kelly, and Mrs. Doyle by Pauline McLynn. All had been comedians and\or actors before Fr. Ted hit our screens. 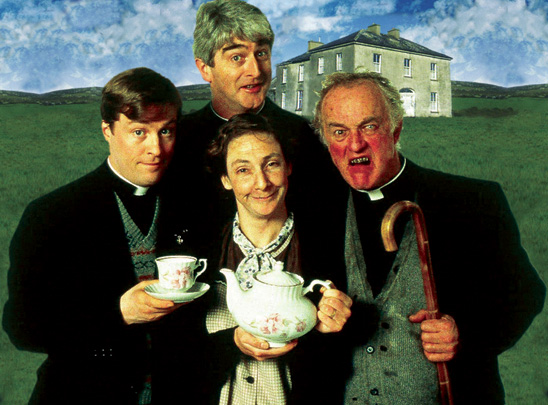 The day after the final episode of Fr. Ted was filmed, Dermot Morgan died of a massive heart attack, in his home in London. It was February 28, 1998. He was a month shy of his 46th birthday. There was an outpouring of grief around the world. His funeral was in Dublin, and attended by many actors, comedians, and politicians. The President of Ireland, and her predecessor both attended. Frank Kelly died 18 years to the day, after Morgan, also of a heart attack. He was 77 years old. The new President of Ireland came, and spoke at his funeral.

I don’t know what you’re doing, but I’m going watch some TV – guess what? And I’ll have a nice cup of tea while I do it…