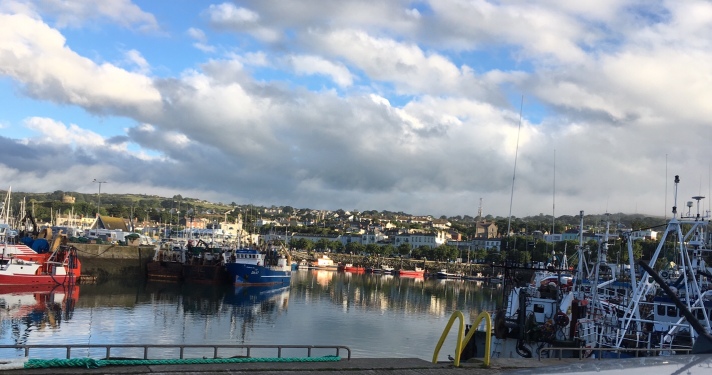 I leave my housing estate and cross the road to the sea front. I sit by the water, looking out towards The Bull Island. Things have changed, yet everything feels the same. The tide is out, and the smell of sewage is strong. It doesn’t bother me though. It reminds me of my youth. Of capsizing my friend’s boat on purpose, so we could play in the water, which we had been forbidden to enter, because of it filthiness. Looking back I think how disgusting this is, but I look back fondly nevertheless. Nostalgia is alive and well. I remember walking out a few yards on a concrete- encased pipe with a cube on the structure. We used to lie on the square top, with our heads dangling backwards, so that the Island was up, and the sea, or seabed, was down. We would do that on and off for hours. We would smoke, sharing a ten-pack between us, paid for by whoever had money that day.

I walk East away from Dublin City Centre, along the rocky shoreline. I come across the covered shelter we used to run to, to escape the rain, and prying adults eyes. Where we smoked and kissed each other. We thought we were so cool, so edgy, and so grown up. We were scarcely teenagers. I remember back to being caught kissing a guy from my class, by my next door neighbor. I was so scared he would tell my parents. Also, his son and I were friends. I didn’t want to be seen as a bad kid. That was a title I relished among my peers, not my friends parents. I also remember drinking in the small space. Rain again in Ireland! Shock horror! When the tide came in, it would come just into the shelter. We were not in danger of getting wet, but were stuck there for an hour or two, unless we wanted to destroy our socks and shoes, by the polluted water.

Walking back up onto the promenade, I cross the bike path, that was created when I was around ten. I stare straight down The Baldoyle Road. The Elphin is on the right. It is the pub I spent many nights in, from the age of eighteen to twenty-five, when I emigrated. Silly, funny, crazy stories pop into my head. Stories people in their teens and twenties retell and dissect the day after. Stories that forty year old me, should be embarrassed and ashamed of. I can’t help giggle though, and look back at them fondly. The time my friend and I drank too many cocktails, and after a few, took turns going to the bathroom. We only discovered on the way home that each of us had thrown up in the bathroom, and continued to drink. I’m brought back to the traditional Irish music, played every Tuesday night. I loved listening to the band playing. I loved the Irish language and culture. I was sure that one day I would marry a fluent Irish speaker, we’d move to the Gaelteacht (Irish speaking parts of the country), and have loads of gorgeous, Irish speaking babies. [Somehow I ended up in Chicago, married to a Mexican, with three gorgeous English-speaking kids]. I remember the Irish folk song-singing marathons we would inflict upon other customers. The pints and pints of Guinness that went down so well, sometimes coming up not so well. I remember the huge crush I had on one of the bartenders, whom I told the night before I flew to London. In my defense, Concord had crashed that week, and I was a nervous flier! Still yeah, embarrassing. It was not the first or last time I would profess my undying love to boys and men. You would think I would have learned, but me and alcohol, do not make the best decisions.

A couple of miles East is the fishing village of Howth (ho-th) which is on the penisula of the same name. Once we were twelve or thirteen, we were allowed cycle to Howth, despite having to take the main road to get there. Once there, we went to the end of the road, and would walk our bikes up a very steep hill, to a quarry. There we would run up hills and slide back down the scree. We would do this for hours on end. We used to spend days up there only going home for lunch. In my mid-twenties, I worked in The Abbey Tavern as a bartender. It was my favorite job, and still is to date. I loved the fast pace of Friday and Saturday nights. I loved stoking the fires, talking to the customers, even cleaning the counters, and the ashtrays. I was proud of keeping order in the bar, and things running smoothly. I got on well with most of my colleagues. I loved counting the cash at the end of the night. The responsibility and the order once again. I took my job seriously, but I also got great pleasure out of it. I loved everything except my managers, who had the social skills of a brick and were quite plainly – assholes. I have one very fond memory of my time there. Myself and another girl were both working a split shift. We had four hours off in the middle of the day. It was one of those freakish days in Ireland where the temperature crept above 70F (20C). It was beautiful, so the two of us bought ice-creams and sat on the pier chatting for hours. I felt so young and free, on the cusp of something big.

The restaurants in Howth are wonderful. I only really started taking advantage of them after I had left Ireland, visiting on trips home. My sister’s hen (bachelorette) night was in Casa Pasta, where I leaked breast milk through my shirt. It ended up with my sister, two of her friends, and me, squashed into the tiny bathroom trying to figure out how to cover it up. My sister-in-law’s parents treated us to lunch in The King Sitric, the day after her wedding to my brother. The food was amazing, and it was great to see my ten-year old daughter dig into fresh oysters with delight. Six months later I was lucky enough to have my second trip home that year. This time my eight-year old son and I went to The Oar House, where my husband and I had been two years earlier. Just like his big sister, my son tucked into his seafood with relish. It was a lovely evening, ending with a walk down the West pier, watching the boats bob side-to-side feet away. The smell of the fish, the noise of the boats, and even the seagulls overhead, were wonderful, and made me miss living in Ireland a little more.

And so I’m back on the other side of The Atlantic, in Chicago, where I now call home. I am a woman of two lands, and of none. Neither will ever be home now. I have been gone from Ireland too long, and I will never have been raised and formed here. As the tears form in my eyes I’ll say “Slán“.